CAMANO ISLAND The science of

and the technical transformations are

revolutionizing the art of photography,

according to Camano Island photographer

The new digital medium is unlocking a

painterly realm of creativity and archival

longevity previously unavailable to photographers working in the analog world of film and chemistry, Dodge said.

Mark and his wife, Vicki Dodge, of Quacky Studios will speak about the changes in photography in "The Appearance of Magic" A fine art photography revolution¡± at 5 p.m. Thursday, May 26 in the Gallery in the Loft at Camano Commons. The presentation is part of the Fine Art & Wine Art Lecture Series that features artist talks amid an exhibit of fine art with samples of fine wine at Blue Heron Cellars downstairs, beginning at 4 p.m.

The women who run the wine shop, Blue Heron Cellars, wine steward Sara Klise, of Arlington, and her assistant Mary Swindell, of Stanwood, share their well-learned knowledge of wine and grapes and they are also both artists as well. Klise creates wine and grape decorated plates, dishes, coasters and various other items of fused glass and makes wine bottles into cheese trays, while Swindell creates delicate beaded jewelry using gemstones and precious metal.

Also at Brindle's Bonnie Zeigler offers casual clothing at Bonnie Z's Place and there are books from Snowgoose Bookstore.

Brindles Marketplace is one of several attractive barn-like buildings at Camano Commons, 848 N. Sunrise Blvd., at Terry's Corner on the north end of Camano Island.

The art talk begins at 5 p.m. sharp. Admission is free but reservations are required because seating is extremely limited.

For more information about the photographer and other art by Mark and Vicki Dodge see www.quackystudios.com

speed with a camera

at your eye at an

and breathe at the

Mark Dodge managed to do just that to shoot his photo "Vicuña Chaccu," which depicts the ritual herding of vicuñas every three years in Peru, an ancient Inca tradition that has been revived in recent years.

In his picture, the vicuñas - related to llamas and alpacas - are being herded into a catch pen by a human chain nearly a mile long, converging on a fence line. The animals then are sheared and released. The village sells the fiber, nearly as fine as cashmere.

Shooting with a long lens, Dodge captured the expression and the thunderous speed of these creatures 100 yards away.

"Having been there, it seemed other-worldly," he said. "You had the feeling you were doing something done for hundreds of years, a primitive approach to a problem that still works."

Dodge and wife Vicki, a photographer, painter and ceramic and textile artist, will have a double booth at Art by the Bay, the Stanwood-Camano Arts Guild's annual festival Saturday and Sunday on Camano Island.

Featured artists this year are Roger Cocke, an architect and ceramic artist, and Helen Lueken, an oil-and-watercolor artist whose painting "High and Dry" is this year's poster image. What started as an art show has moved into a full-fledged arts festival, with 115 arts-and-crafts booths, entertainment, food vendors and a children's art area.

"It's a social event for all the people who come together, not just the artists but the public," Dodge said.

After all these years, Dodge likes photos that project a quality of motion and mystery.

"One definition of photography is 'the decisive moment,' and it's definitely that," he said. "I'm always looking for that decisive moment that evokes a feeling."

Dodge and his wife are former owners of alpacas, and they saw the Incan ritual first in 1997 at the International Conference on Peruvian Camelids (camelids are a family of animals that includes camels, alpacas, llamas, vicuñas and guanacos). They returned to photograph three years later, and they were among the first outsiders to see the herding ritual known as chaccu.

The photograph won first place at the Coupeville Art Festival on Whidbey Island and best of show at the Stanwood-Camano Arts Guild's spring invitational.

There's an entertainment lineup at the festival, as well.

Stay Tuned, an acoustic fiddle-and-guitar trio, will perform from 10 a.m. to noon Saturday; and at noon, Village Theatre's Kidstage will join with Sky Theatre to present numbers from "Footloose," "The Wizard of Oz" and other musicals. At 1:30 p.m., singer-songwriter Carol Ann Hunner will perform, and the Papa Murat Band will play "tropical electric folk jazz" from 2:30 to 4:30 p.m. Saturday.

On Sunday, Cathy Tibert and Friends will play at 11 a.m.; flamenco-blues guitarist Patti Vail at noon; folk-country singer-songwriter Steve Harris at 1 p.m.; and the South End String Band, a "fiddle-tunes big band," from 2 to 4 p.m.

Story by Debra Prinzing, special to The Herald

but it's a pleasure to view art

for the garden in a natural

outdoor setting. Visitors to the

Studio Tour will have a chance

to see the work of several

talented island artists who use

the landscape for both

inspiration and display. The

23 Camano Island and Stanwood studios and galleries, begins Friday and continues through Sunday.

Showcasing clay, stone and metal creations in a compatible venue such as a garden appeals to many Northwest artists. Far more than making garden ornaments, these artists consider factors such as proportion and scale, sun and shade, and exposure to the elements when they design for an outdoor setting.

Dodge and her husband, photographer and

years ago from Monroe, where they ran the

They were looking for a drier place and

discovered on a map that Camano Island's

north end was outside the rain shadow,

our professions every seven years. We

decided that animal husbandry wasn't our

'bliss,' so we sold our herd and moved here."

The Dodges renovated a one-story ranch house with fabulous views, adding a suite for Mark Dodge's 93-year-old mother. They converted a four-bay RV garage into studios for music, painting and ceramics.

The couple has also transformed the property into an inviting haven. A low cedar-sided wall topped with an arbor for vines spans the entrance of the three-acre site. The wall shelters an ornamental entry garden and gravel courtyard, the ideal setting for displaying Vicki Dodge's popular clay leaves. In varying organic shades of fired clay, the playful leaves are grouped in small vignettes with blown glass balls, made by an artist friend, Mark Ellinger. They also rest in the base of a small pond, serving as both ornament and shelter for fish.

Elsewhere, stacked stones look like diminutive monoliths, adding a symbolic richness to the garden. Vicki and Mark Dodge created these vertical rock sculptures after returning from a trip to Peru. "There, people stack rocks for stamina and strength," Vicki Dodge explained. "They believe one's lineage and history are stored in rocks."

Using the potter's wheel, she throws decorative stoneware finials. After glazing the whimsical pieces, she screws them to the top of each post. "To me, the garden is another palette," she said.

Vicki Dodge said she first fashioned a giant leaf from clay for her own garden. But once friends and customers began seeing the life-size foliage, she soon had requests for more. "Now I have to go out and find big leaf maple and cardoon leaves," she said and chuckled.

Called "Vicki's Fresh-Pressed Ceramic Leaves," the one-of-a-kind pieces are suitable for laying in the garden or hanging on a wall. Vicki Dodge uses actual leaves as patterns to cut out shapes from sheets of wet clay -- even pressing the veins and stems into the clay to create an authentic design. The firing method adds a shiny glaze to highlight the recessed veining.

While Vicki Dodge is equally comfortable taking brush and paint to a 4-foot tall canvas or blending alpaca and wool fibers into felted hats, scarves and caftans, she likes the stoneware leaves because they're accessible: "It's very important to produce reachable art," she said.

Vicki Dodge's life is as colorful as her art.

What makes Vicki Dodge willing, at 54,

to be called the Quacky Lady? She's a

potter. A weaver. An alpaca rancher. A

and ripe tomatoes. A baker: She once r

an a company called Great Cakes and

Edible Monuments. She and husband

Mark Dodge have lived on Camano

Island for the past three years, turning

a former garage into Quacky Studios.

Duck imagery has pervaded their lives

for the last 20 years. There's where the

"We're sort of into whimsy here," Vicki Dodge said. The studio, where Mac, the rust-colored gallery cat, sleeps in a straw basket by the window, overlooks Skagit Bay. "This is our commute, right here," said Mark Dodge, gesturing to the pathway between the house and the studio. Call it a compound, not a house. They share it with Mark's mother, Regina. It's such a sanctuary that it's harder and harder for them to leave the island. What's to compare with a sweeping view of the bay and 78 herons on a sand bar at low tide?

Mark Dodge, a contract writer doing documentation for software companies, also records music there. "We bounced around looking for home, and this felt like it the day we drove in," he said. "We had been looking for a place we could live and work, and we found it here."

"We like choices," Vicki Dodge said. "We thrive on choices. I had said, 'Mark, when you marry me, you need to understand. I want to change professions every seven years.'"

And they've had a lot of professions.

Vicki Dodge ran Mukilteo Mudworks pottery in the mid-'70s, then opened the Riverside Gallery in Everett. After she met Mark, they founded the Everyman's Fair, which became the Equinox Arts Festival. In the early days of the duck theme, they started Duck-Fest. They also had a fiber business called Mother Duck Fibers. For a few years, they went on the road as part of Mark Dodge's music career. Vicki Dodge would tuck a spinning wheel in with the sound equipment. After resettling in the Northwest, Mark Dodge created Great Cakes and Edible Monuments in Bellevue, baking everything from wedding cakes with white chocolate leaves to a tuba cake for a Harley-driving, symphony tuba player. After selling the company, they went into the alpaca business, The Quacky Alpacky Ranch and Studios. They've just sold the herd, and are now going back to their true love, the arts. Mark Dodge, who plays bass and lead guitar, has his own label, Big Quack Records, and has just recorded a new CD, "Giza."

"I'm still the person who goes around with the stick and stirs up the anthills," she said with a laugh. "I'm that person. I'm one of those people who wants to go out there and get others moving." 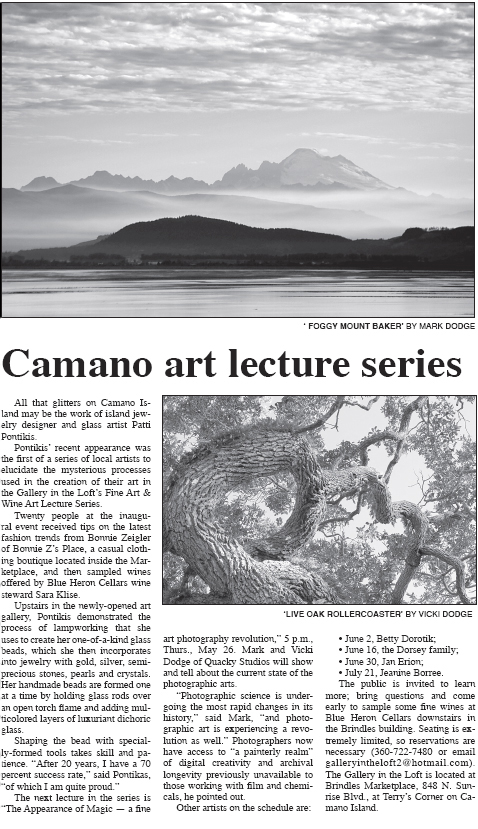 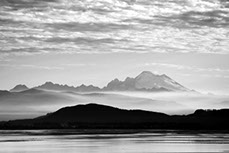 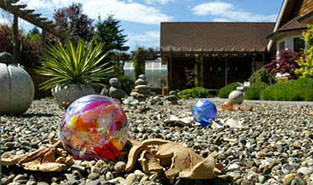 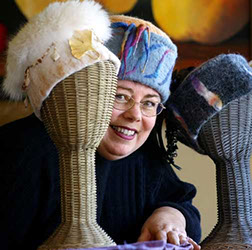 Our 26th Year on the Web